Flamegraphs are the industry-standard way to visually represent runtime code stack traces and their respective time to execute as a hierarchy.

Below is an example Flamegraph produced by the Chromium Profiler:

To represent this call stack as a flamegraph, we would do the following: 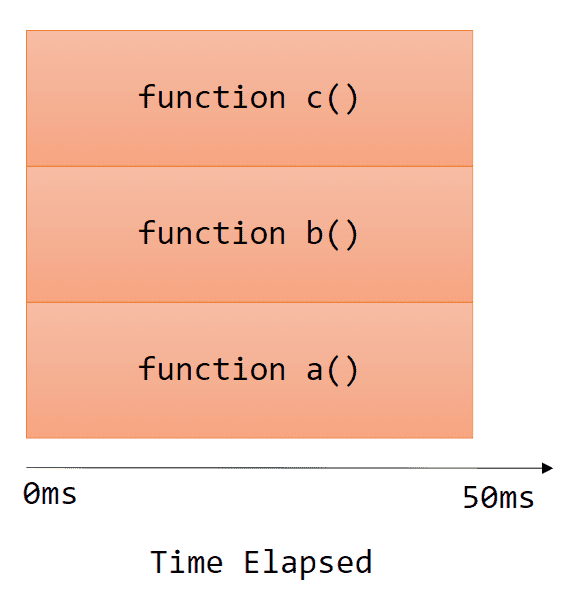 Let's adjust function b() to invoke function c() 3 times, instead of just once.

This will initiate 3 calls to function c(), each taking 50ms.

Let's apply one more adjustment and produce another flamegraph, this time to function a().

The flamegraphs I've shown in the examples so far are traditional flamegraphs. Many performance profilers will produce graphs that look exactly like what I've shown.

However, the Chromium F12 Performance Profiler produces a variant of the traditional flamegraph, known as an icicle graph.

For example, in that last example, the Chromium F12 Performance Profiler icicle graph would look like this:

Looking at a real graph

I captured a Chromium Performance Profile of our example code we've been referencing, and this is what icicle graph was produced!

You can collect a profile of this scenario and inspect yourself by collecting a Page Load trace of this example page.

Note here that due to the way the profiler collects data while tracing the browser at runtime, you don't see nice even 50ms blocks for function c() and function b() calls in the Main pane. I've added custom performance timing markers so we can compare what the profiler collected with more precise custom markers captured in the Timings pane.

What's clear from the captured graph in the Main pane:

You now understand and can read basic flamegraphs!

Consider checking out my tip on flamegraphs in-depth to read more advanced flamegraphs!

That's all for this tip! Thanks for reading! Discover more similar tips matching Beginner, CPU, and Flamegraphs.