Detecting when the Browser Paints Frames in JavaScript

Do your performance measurements capture when the browser renders pixels to your user?

Most likely, not! In my experience, most developers capture Render Time metrics at some arbitrary time when React or other JS code is constructing DOM.

It's not surprising, as the browser doesn't provide an API to notify developers that a Paint event occurred, other than for the initial Frame paints on page load.

In this tip, we'll cover how to measure when pixels appear on the screen at any point in your application's lifecycle, and how it works under the hood.

Capturing Paint time measures one of the most important scenarios for your users -- the UI is presented on their screen! 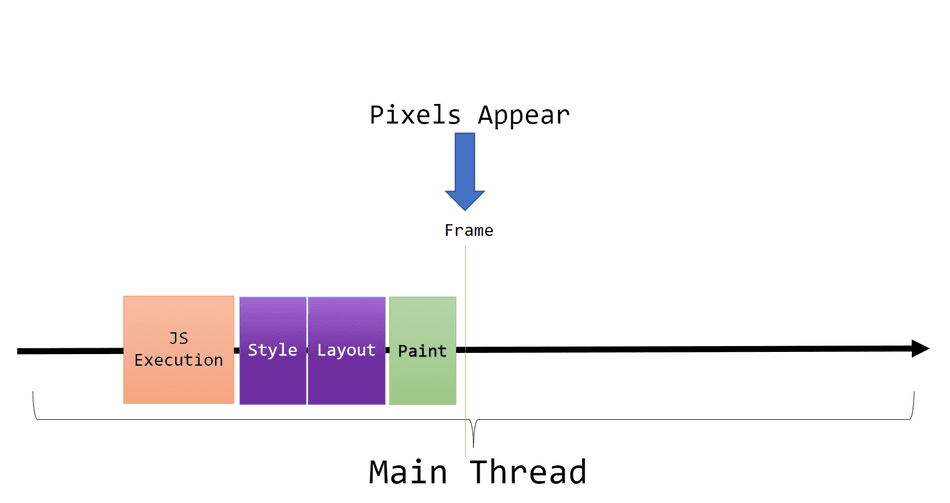 It can also help highlight any additional time or inefficiencies between your DOM updates and when the Frame is produced. 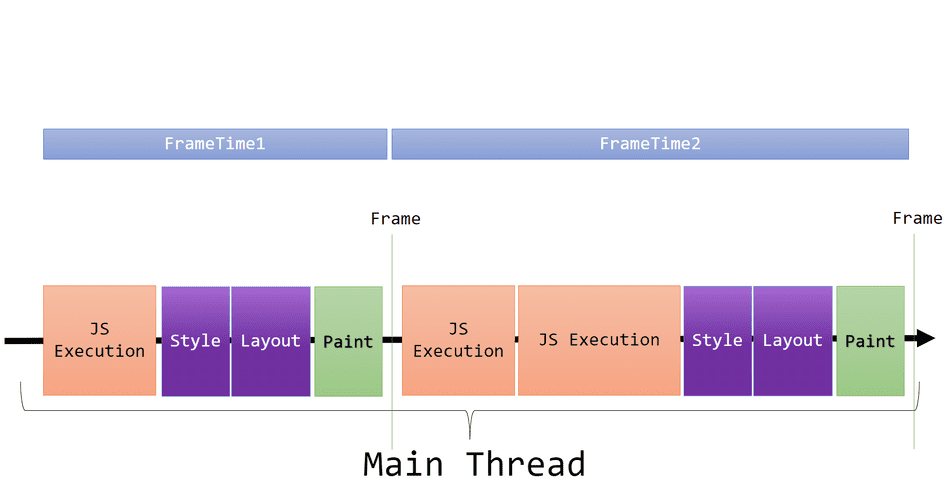 Inefficiencies between DOM update Tasks and Frames may include:

When does Paint occur?

The browser event loop is responsible for interleaving your JavaScript tasks (like React DOM updates) and rendering Frames on the browser's Main Thread.

This means that any DOM updates in your JavaScript must complete before the browser can present those updates visually to your users.

For example, let's say you have some React rendering that drives the presentation of your UI to your users. Any changes made by React via JavaScript won't be visually reflected until after Paint runs. 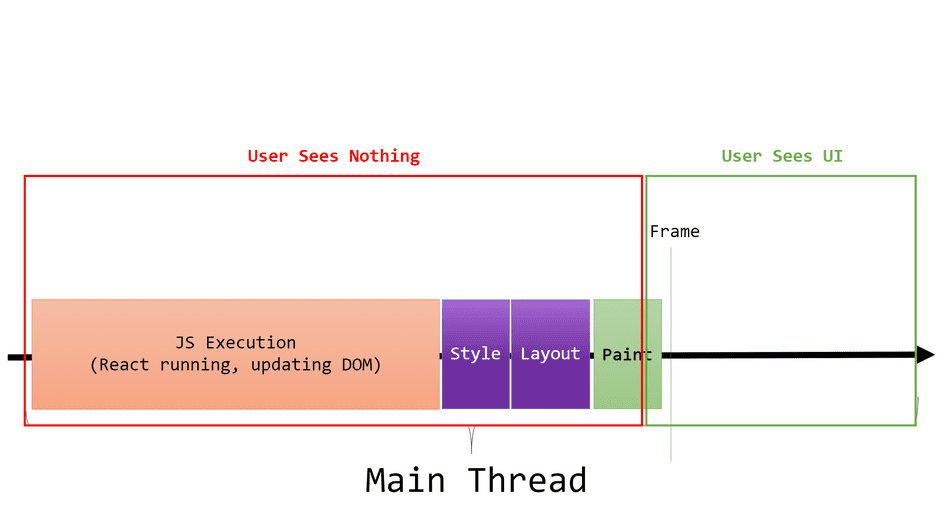 The most flexible and cross-browser compatible way to detect when Frame paint occurs is through the following snippet:

You will want to invoke runAfterFramePaint in the same Task as the one that's performing your DOM updates.

If we visualized this snippet on the Main Thread, it would look like this:

Note: requestAnimationFrame is often abbreviated as rAF and verbally pronounced as "raff".

How does this work?

At first glance, the APIs invoked here look quite peculiar given our objective is to measure Frame time:

However, understanding how the browser represents these two APIs will clear things up!

requestAnimationFrame allows web developers to run a callback right before the browser completes next the Render Steps Task. This differs from ordinary Tasks, which are interleaved by the Event Loop and drawn from the Task Queue.

Observe the following diagram, and when requestAnimationFrame callbacks run:

For more details on requestAnimationFrame, read my in-depth tip on the API.

MessageChannel is usually used for posting messages between threads or processes within the browser, but we aren't utilizing it for its intended purpose here!

I've extracted the relevant part of runAfterFramePaint here for reference:

MessageChannel is being used here as a generic mechanism to Post a Task to the Task Queue.

Furthermore, Tasks posted to the Task Queue via MessageChannel are prioritized above most other Tasks.

As a result, what we are telling the browser to do here is: Run callback as a Task, with high priority.

When we call postMessage inside of requestAnimationFrame, the the browser is instructed to queue a high priority task on the Task Queue. 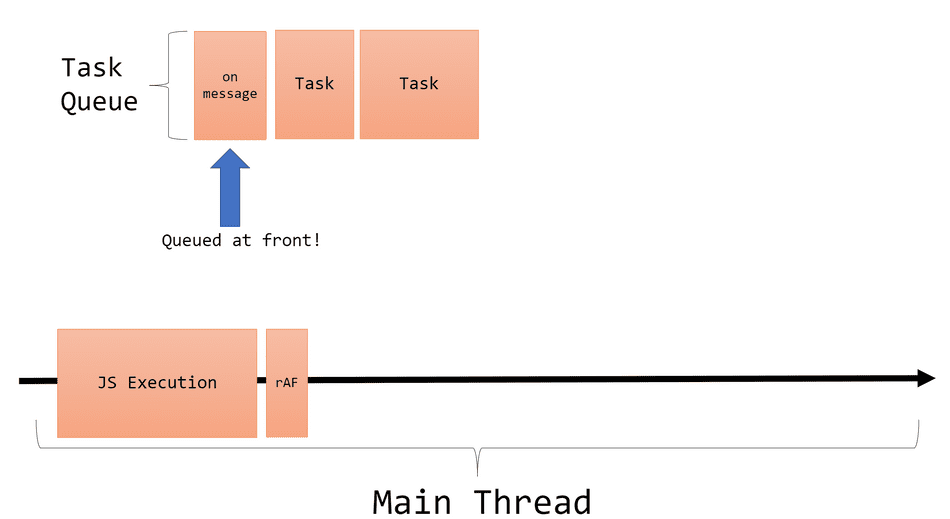 Once the Task is queued, the browser continues to produce a Frame by completing the Render Steps (which always run after requestAnimationFrame callbacks complete). 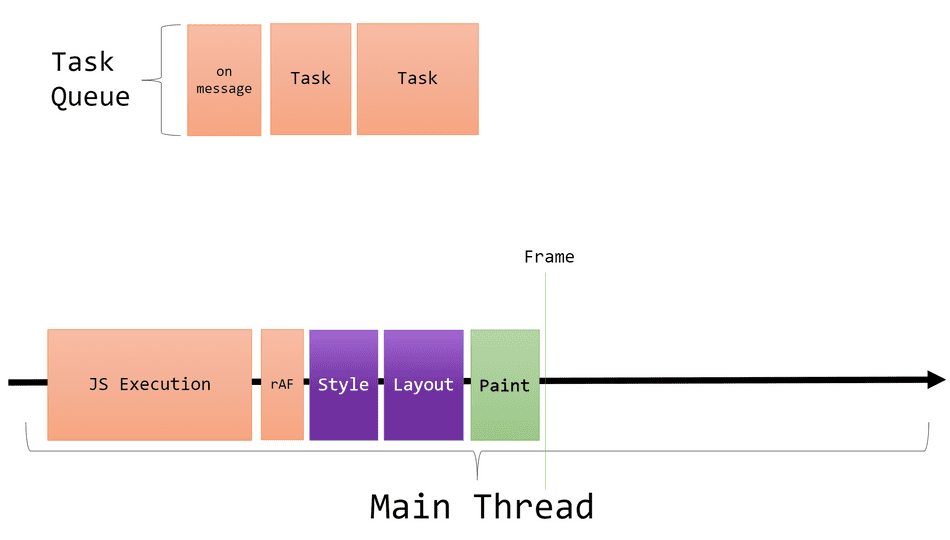 Once the Render Steps complete, the Event Loop resumes pulling from the Task Queue, and selects the next Task -- in this case, a high-priority onmessage Task. 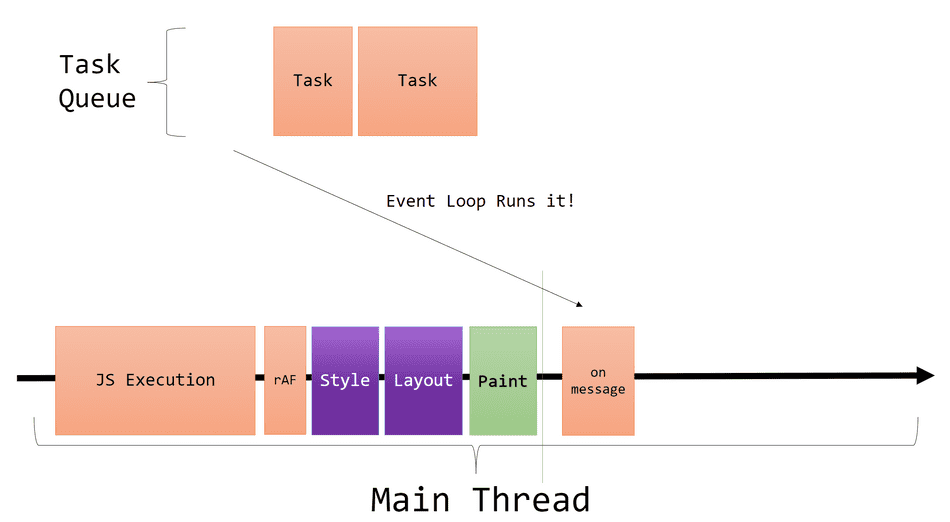 We now have a handle into a Task that runs shortly after Frame paint!

How accurate is this?

This method is not 100% accurate, but it's as close as web developers can get with currently available browser APIs.

A few points of note:

I've put together the example above in a demo page for you to collect a trace of yourself!

In this example, I capture two measurements:

One can observe that the Frame_Time is longer than the JavaScript_Constructing_DOM_Time, because it includes the Render Steps Tasks:

With this knowledge you can ensure your performance marks and measures are user-centric, and capture when your key pixels are visualized on your user's screen.

Consider the following tips next:

That's all for this tip! Thanks for reading! Discover more similar tips matching Browser Internals and Measuring.