The browser's style and layout process (also known as reflow) is responsible for assigning visual styles and geometry to elements of a web application. It is one of the most expensive computational operations performed during the lifecycle of a web application, yet many web developers introduce code that forces it to run more often than it needs to!

When JavaScript codepaths force the browser to perform the reflow process outside of its usual cadence, it's called a forced reflow. When codepaths perform a forced reflow multiple times in quick succession within a frame, it's known as layout thrashing.

In this tip, we'll discuss forced reflows, layout thrashing, how to spot it in your application, as well as techniques for mitigating the performance impact.

I recommend familiarizing yourself with my tips on the browser rendering pipeline and the browser event loop before reading this.

It typically runs once per frame, right before pixels are about to be presented on screen. It is initiated by the browser, and run on the main thread.

If reflow runs during this phase, it's known as asynchronous reflow, because it was not forced to run synchronously outside of the scheduled rendering phase.

Certain JavaScript Browser APIs can call into the Style and Layout Engines to acquire styling information and precise coordinates of elements. For example, the Element.getBoundingClientRect() API synchronously returns the bounding box and coordinates from the underlying Layout Engine primitive:

If the coordinates or styles for the requested element have not been computed yet, the browser must immediately compute them via performing reflow. This immediate invocation of the Style and Layout engines to resolve undetermined coordinates is forced, therefore referred to as a forced reflow (or synchronous reflow). 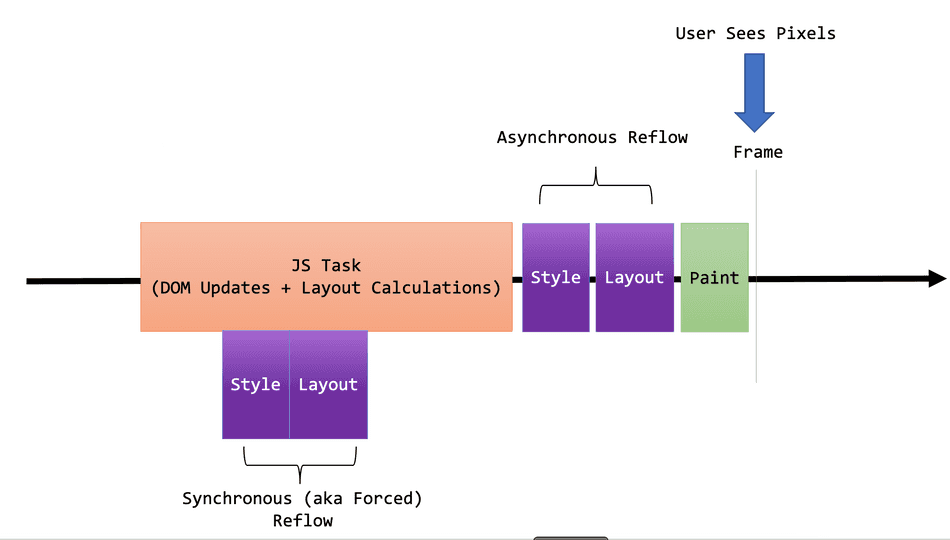 In an actual profiler trace, forced reflows will surface like this in your flamegraphs. 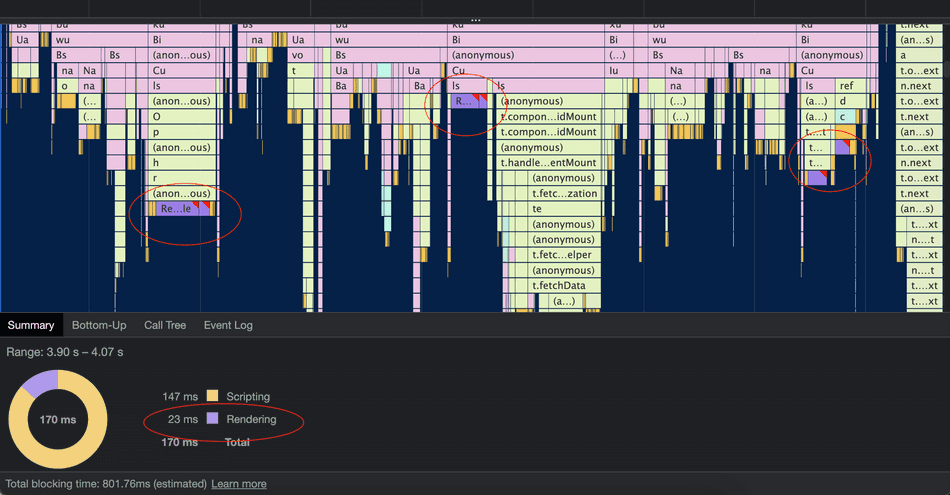 If you hover over one of these tasks, you'll see a warning stating: Forced reflow is a likely performance bottleneck.

Aside: Consider studying the Chromium source code for the getBoundingClientRect() API to see where reflow gets invoked!

When a web page initially loads, the DOM is parsed and every element is without visual styles or positioning information. The browser's Style and Layout Engines must compute styles and geometry for each visual element before drawing them on screen.

The browser works as hard as possible to minimize the cost of reflow on your web application. It does this by storing and caching the styles and positions of each visual element in a browser-internal data structure known as the Render Tree (or Layout Tree) after a successful style and layout pass.

Once styles and coordinates are cached, subsequent access to styling and geometry information is extremely fast. In our example, once asynchronous reflow is completed, if we had a script that called getBoundingClientRect() on an Element, the results will be retrieved from cache:

Many web applications are not static HTML web pages. Instead, they utilize client side JavaScript (like React) to create and update visual elements.

When JavaScript adds elements to the DOM, they are inserted without styling positioning information. That is because reflow typically runs asynchronously, right before a frame paints. This takes place at some point on the main thread, after JavaScript tasks have completed.

For example, consider adding a modal to the DOM. When the HTML elements for the modal are inserted into the DOM, they are originally un-positioned: 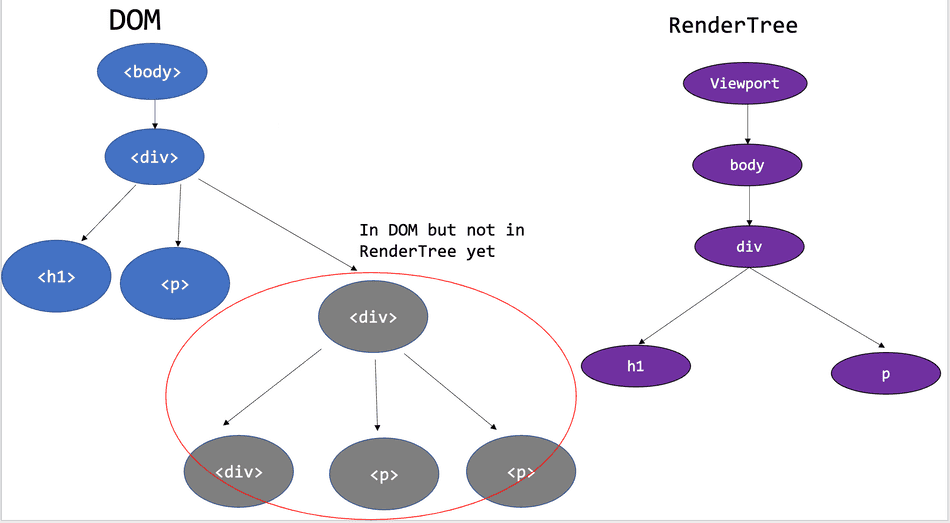 This mutation invalidates (a portion of) the cached Render Tree. Later, when asynchronous reflow occurs, each DOM node is assigned styles and positions before being displayed on screen:

When this completes, this will result in an updated and cached Render Tree: 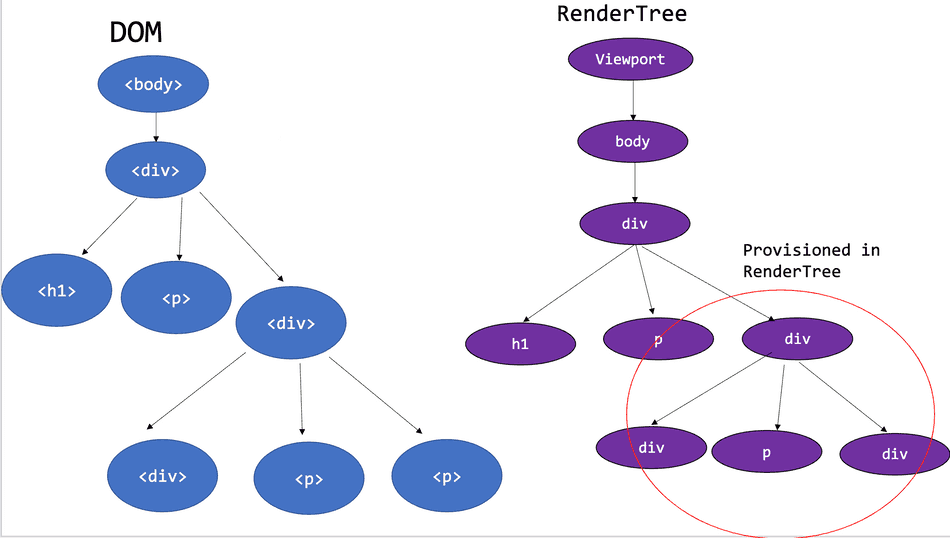 Note that the entire tree is not usually entirely recomputed -- the browser tries to only recompute the minimal subset of the tree affected by the addition. In this way, reflow is incremental.

The scope of the invalidation applied to the Render Tree will vary based on the size and type of DOM mutation (i.e. adding a single element, updating a class, removing multiple DOM nodes, etc.).

We've discussed how JavaScript codepaths can invalidate the Render Tree, and how JavaScript APIs can query the underlying Layout Engine primitives (i.e. getBoundingClientRect()).

Combining these two concepts, let's illustrate a piece of JavaScript code that invalidates the Render Tree and forces a reflow:

We can see here that the we first perform a mutation by updating the classes for a DOM element. This operation invalidates a subset of the Layout Tree, marking the node as dirty. It's positioning and styling information is no longer accurate and need to be recomputed.

The problem here is in the subsequent operation, calling getBoundingClientRect() on the invalidated DOM node. This will invoke a synchronous reflow because we've asked the browser to get the position of a dirty / un-positioned element. It must be positioned immediately in order to satisfy the request, as it doesn't have accurate information available.

From a thread perspective, this will extend the duration of the JavaScript task, potentially creating a Long Task.

Forced reflow does not always manifest a performance issue. In some cases, it simply shifts the reflow cost to run during the JavaScript task, rather than the asynchronous reflow phase (as that can utilize the cached output of the synchronous reflow).

Regardless, unintentional synchronous reflows are generally a good idea to avoid if possible; we'll discuss why, next.

We can see here that we are invalidating the Render Tree, then forcing a reflow multiple times within a Task.

Depending on the size of the invalidation (for example, if you are invalidating a large portion of the Render Tree), this can manifest as a serious performance issue!

In this case, we are forcing the browser to run the expensive synchronous reflow operation more times than necessary for a single frame:

Unlike a regular synchronous reflow, layout thrashing not only shifts the timing of reflow, but also the number of times layout is invoked which can create long tasks and degrade frame rate.

You will want to avoid Layout Thrashing in all cases. There are a few well known general strategies for preventing it!

Reading positioning and styling information can be quite fast if performed on a fully cached, styled and positioned Render Tree.

If we can leverage these two facts, we can convert code above that that thrashes the layout engine:

This way, the expensive reflow cost is only going to happen once, during asynchronous reflow.

Tip: The requestAnimationFrame API can help orchestrate your reads if you have to perform them after writes.

Be Aware of Layout Inducing APIs

When authoring your web application, you should be aware of the various browser APIs that can force reflow. You don't need to avoid them at all costs, but you should be mindful of when these are invoked, and profile appropriately to ensure you aren't causing unexpected synchronous reflows.

By using React you are not protected from Layout Thrashing. All web applications can abuse the browser's layout engine, even those written in modern web frameworks.

React's declarative syntax adds a layer of indirection into when the actual DOM mutations (and Layout invalidations) occur. This can make spotting Layout Thrashing harder when reading through code.

In my experience, Layout Thrashing occurs in useEffect hooks trying to measure DOM nodes or other React components. Typical use cases for performing this type of measuring include positioning a Tooltip or restoring Scroll Position.

If you are unsure if your React useEffect callback is forcing synchronous reflow, you can collect a trace and search in the flamegraph for the callstack that forces the reflow.

The React team has provided a specialized hook, useLayoutEffect, which can use to read positioning information after React has flushed its mutations to the DOM:

As web developers, we must be mindful of when and how the browser's underlying Style and Layout Engines are engaged to ensure web applications are leaning into the highly optimized incremental design provided by the browser, rather than against it.

This will ensure we provide a consistent and optimal frame rate and user experience.

That's all for this tip! Thanks for reading! Discover more similar tips matching Browser Internals and JS Optimization.